e-Wallets in South and South-East Asia: The Booming Monetisation Opportunity

With $13.3 trillion turnover, the share of e-Wallets in global POS transactions value stood at a whopping 28.6% in the past year. South-East Asia is a mobile wallet-first region and it is seeing the fastest growth in e-Wallets use, although many of the neighbouring countries are following in their footsteps, too. Every third e-Wallet account on the Asian continent is registered in South Asia - the large unbanked populations of India, Pakistan and Bangladesh have adopted digital wallets for a growing portion of their financial needs. 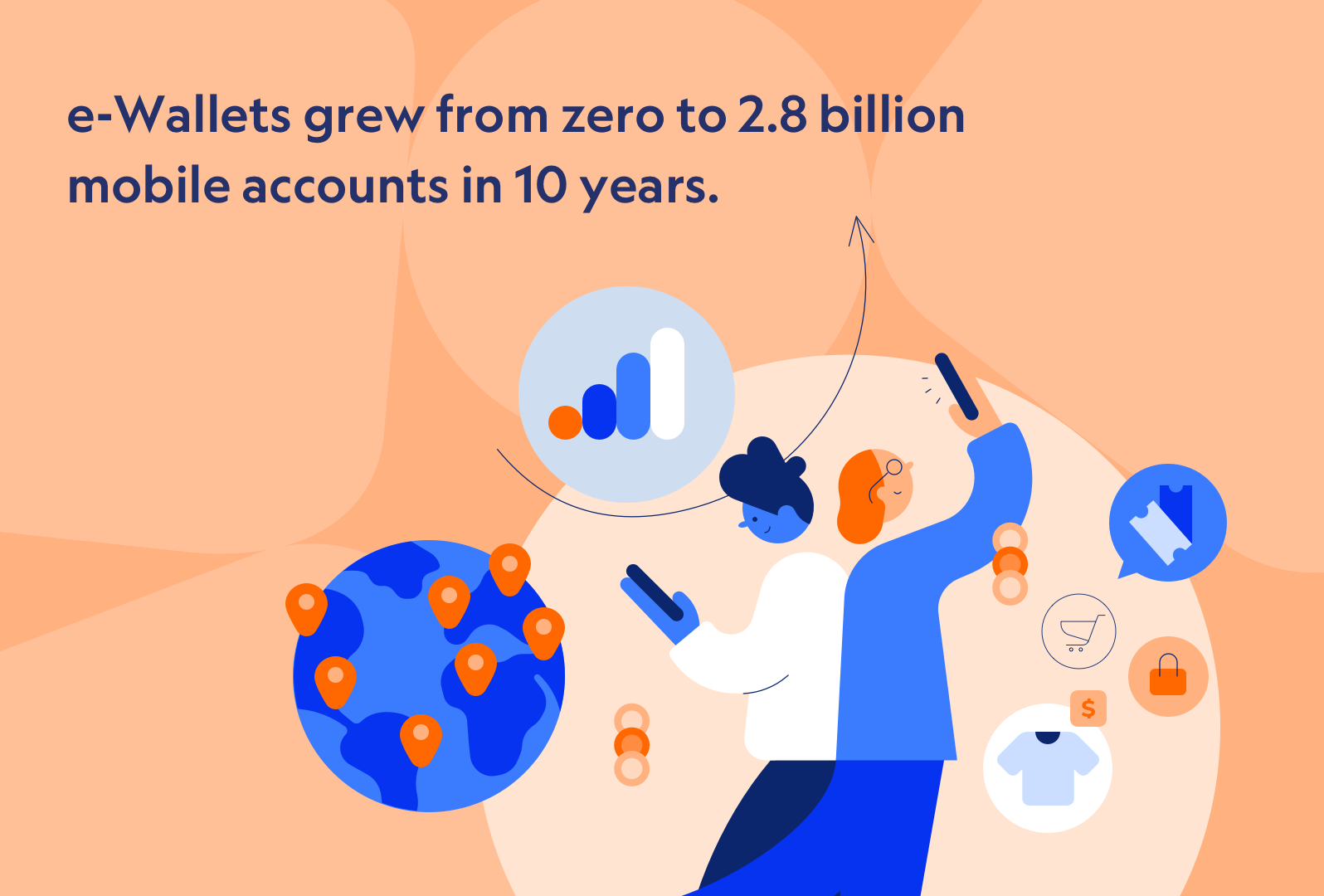 e-Wallets grew from zero to 2.8 billion mobile accounts in 10 years

From zero to 2.8 billion mobile wallet accounts in only 10 years

Digital wallets, also termed mobile wallets or e-Wallets, allow consumers and businesses to make payments and peer-to-peer transactions, to cash out, to pay invoices online or at the point of sale (POS). They are mostly available as apps on smartphones, although many offer basic functionality on feature phones, too. Because they use encryption, they are considered to be safe and secure.

Compared to other digital payment options, they carry several advantages. E-Wallet accounts are easy to top up with cash, cards, peer transfers and in other ways. Home computers and bank accounts are not necessary - everything is done on a mobile phone with an internet connection. Moreover, many e-Wallets enable transactions over the USSD protocol or SMS, which means they also work on feature phones and without an internet connection. E-Wallets have built frictionless checkout experiences; they offer adjacent services and reward programs that keep fuelling adoption. Merchants looking to charge for their digital goods and services over e-Wallets will find their price points to be flexible, and pay-out cycles to be swift and efficient.

Accelerated by the COVID pandemic and the growth of SuperApps, mobile wallets became the first digital payment option in many developing countries. In Asia, they surpassed credit cards even before the pandemic hit. Google launched the first mobile wallet ever only 11 years ago. Last year, some 2.8 billion people had a mobile wallet account. With new users joining daily, Juniper Research believes the number of users will grow to 4.8 billion in the next two years. 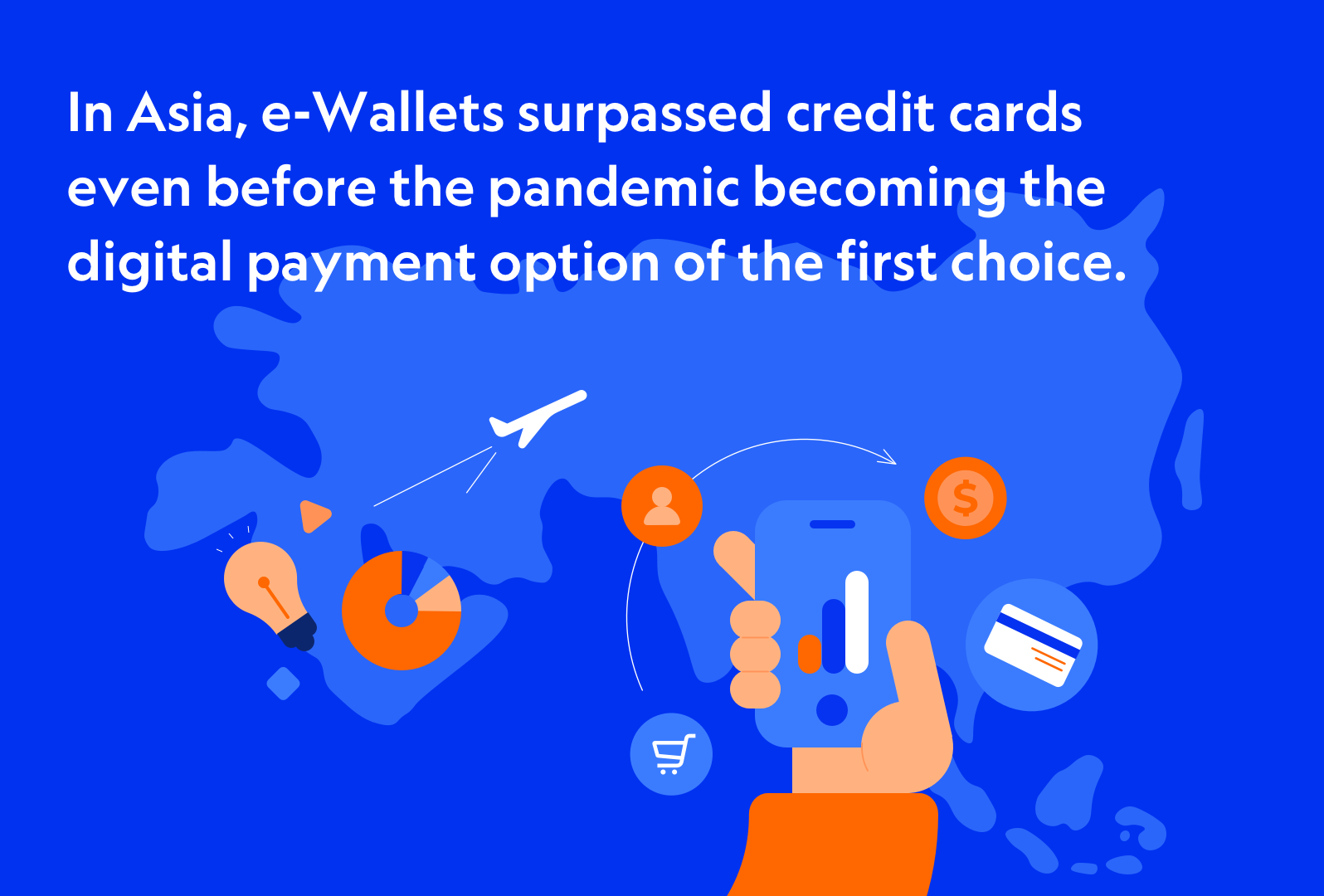 e-Wallets surpassed credit cards even before the COVID-19 pandemic

The majority of 1.7 billion people living in South Asia got their first private access to the digital realm through smartphones or tablets. Affordable and easy to carry around, smartphones opened the door to rich digital communication and entertainment. They provided access to financial inclusion, too, enabling new local economies and business models.

According to the World Bank, more than 48% of people in Bangladesh were unbanked in 2021. Despite the high percentage of bank accounts in India (80%), one in two of those accounts is not in use. Pakistan has one of the largest percentages of the unbanked adult population in the world - it stands at around 70%.

More than 320 million people in India, Pakistan and Bangladesh rely on cash for their everyday financial needs, and to get their salaries paid. Some of them will gradually turn to banking services, but the transformation is slow, if compared with the fast pace of change in the global digital environment. It is no surprise that the number of adults owning a bank account in Pakistan has grown by only a little more than 10% since 2011.

Meanwhile, an astounding 80% of the adult population of Pakistan got their mobile phone subscription. Many smartphones come with pre-installed e-Wallets. It is not difficult to see that access to digital wallets is easier and more convenient when compared to banking services.

Easypaisa is the oldest and the most popular digital wallet in the country. More than 25 million people use it regularly. Founded by Telenor Pakistan in partnership with Tameer Bank (later Telenor Microfinance Bank), Easypaisa has, together with its competitors, revolutionised the country’s financial landscape. 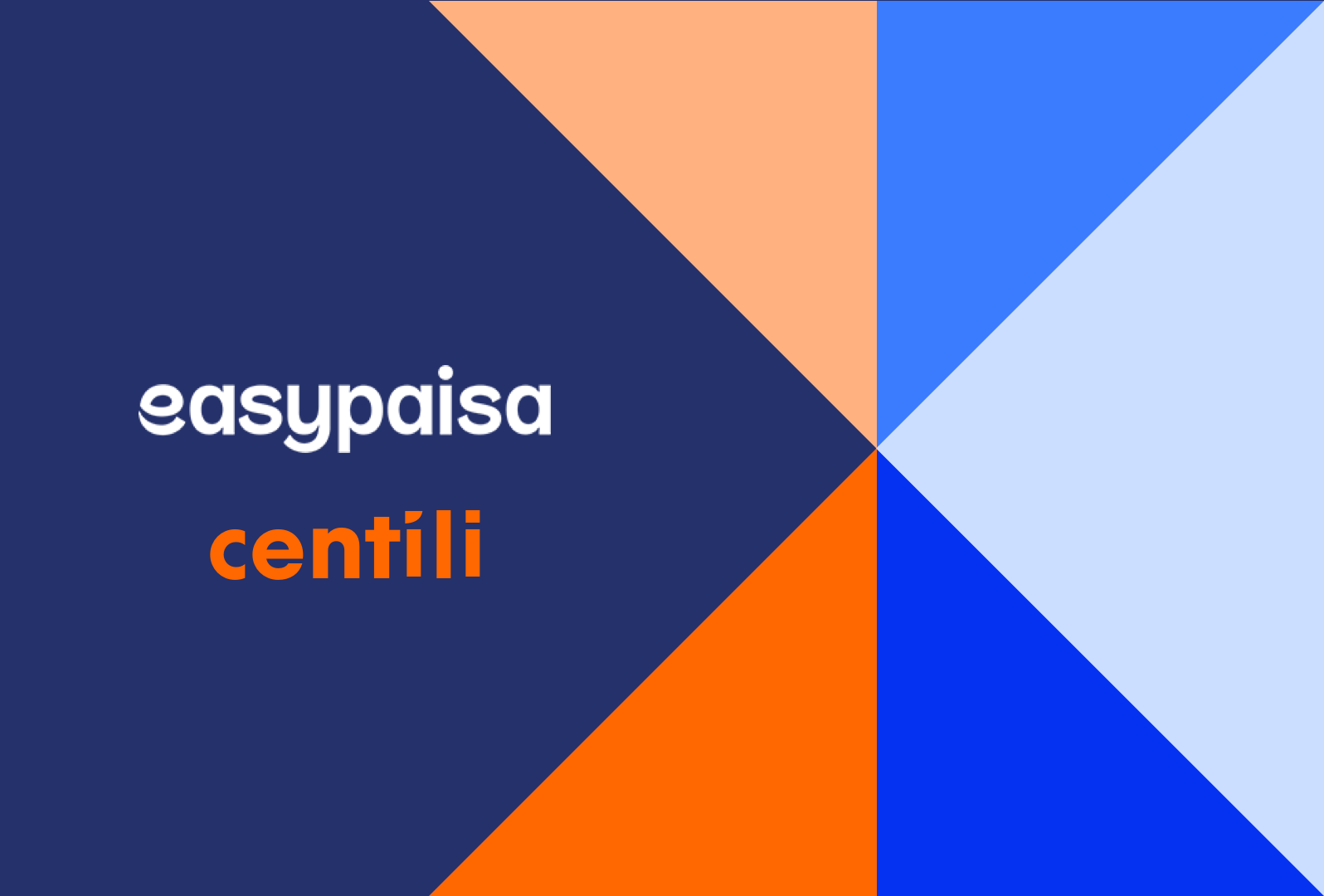 Pakistan's Easypaisa e-Wallet has been added to Centili monetisation platform

At the same time, Bangladesh had a financial inclusion rate of 35%, with 41 million people having a bank account. bKash, country’s largest mobile financial services provider added mobile merchant payments to its services back in 2014. Eight years later, bKash has 57+ million users and investments from Softbank, AliPay, Melinda and Bill and Melinda Gates Foundation which made it the first unicorn in the country. bKash holds 75% of market share and is the top employer in Bangladesh. It has an ecosystem of 47 thousand partners; many factory workers get their wages paid via bKash, and use it for nano loans and savings plans. 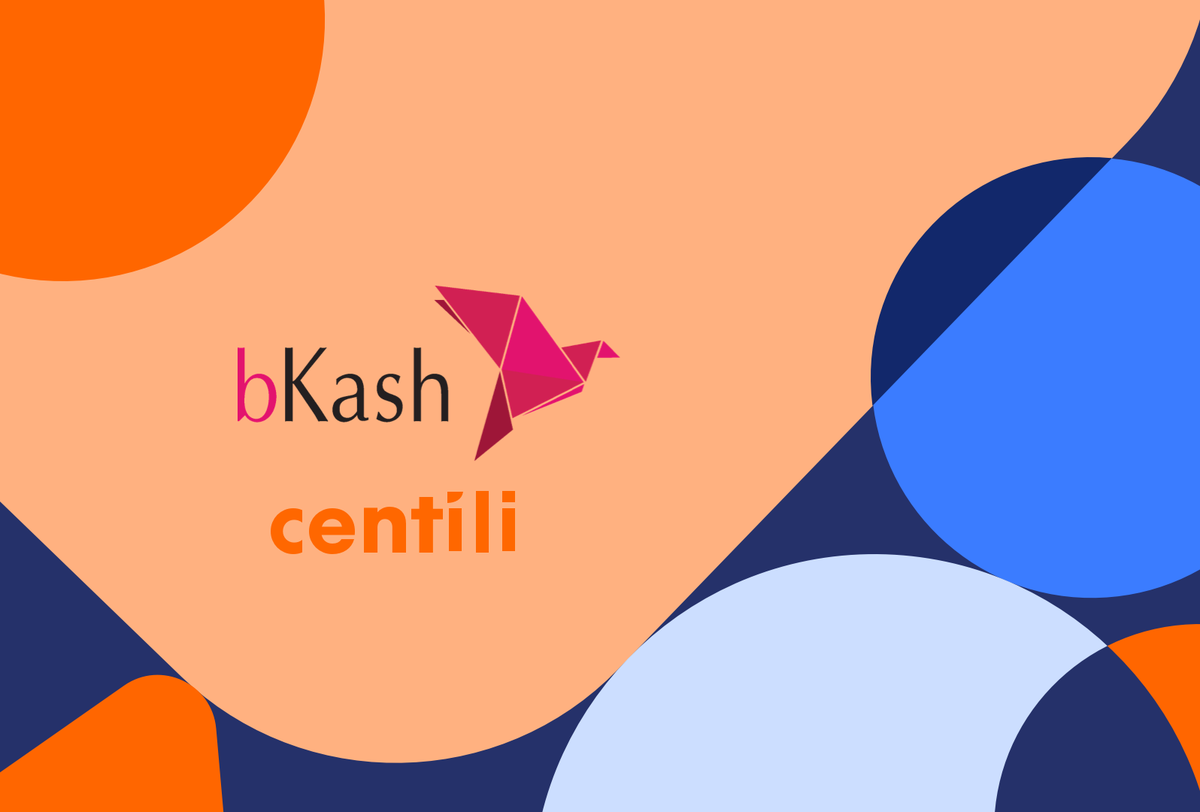 As an e-Wallet first region with the fastest growing user base, South-East Asia is a prime hot-spot for both e-money and digital content providers. Indonesia is a regional leader: mobile payments proved to be a gateway to financial inclusion for 278 million of people scattered around the world’s largest archipelago. Only 0.7% of them use credit cards. In contrast, 67% of the adult population owns a smartphone. Internet penetration rates are even higher, which opens up channels for both national and international digital services distribution and sale.

Phones sold locally will usually come with pre-installed wallets, offering incentives to new users. This results in Indonesians using 3.2 mobile wallet accounts, on average. Some of the most prominent e- Wallets are Dana, LinkAja and Ovo, the country’s first fintech unicorn. Together they cover 80% of the Indonesian population or more than 210 million people. Busted by exclusive deals and offers, available at thousands of sale points, mobile wallet transactions in Indonesia are projected to grow by 841% in the next three years.

With its young and technologically savvy population, the country poses a significant opportunity for the adoption of e-Wallet payments across different industries. The biggest growth rates are expected in digital entertainment, education, gaming, and video on demand, with most transactions lower than $7.

Centili - enabling merchants to monetise over wallets in Asia

Using Centili platform, international merchants can easily add Easypaisa, bKash and other digital wallets as a convenient way to charge for their games, music, video, e-learning and other types of digital content they sell in South and South-East Asia.

E-Wallets proved to be:

E-Wallets have seen massive investments and developments in the last years, growing in technical prowess, customer service and innovation capability. They became success points for gaming, commerce, and loyalty. In some instances, they emerged as “super apps” or financial superstores, also described as the “hubs of financial connectivity”.

It pays off to be an early provider: Explore your opportunities

While South-East Asia is the fastest growing mobile wallet market in the world, South Asia leads in terms of population and potential. Early providers like Easypaisa in Pakistan and bKash in Bangladesh are generating most of the business. Owing to their early start and consistent upgrades, they earned trust from consumers by providing convenient financial solutions via mobile phones.

Get in touch with Centili to learn how to monetise with e-Wallets in South and South-East Asia. For more than a decade, we have enabled international merchants to integrate multiple payment methods over a single technical platform, and establish a global monetisation network for their digital services. In doing that, we also solve the challenge of complex country-level regulations, taxes and payout procedures, which would otherwise put a burden on digital merchants and content providers.

Direct Carrier Billing in 2022: Why Is It More Relevant Than Ever?