After spending a decade in the DCB business, last year, Centili pivoted as an MPaaS company. With confidence in our technical engineers, we are ready for the shift. The company’s growth and a more dynamic cultural landscape ask for a new focus on teamwork and people operations.

As we like to learn from the best, we invited Formula 1’s Mark Gallagher, who has spent the last 30 years in senior leadership roles within Formula One motor racing. A keynote speaker, author of “The Business of Winning”, and owner of Performance Insights consultancy, Gallagher gave an inspiring webinar session at the Centili Anniversary Week earlier this year.

Formula 1 is one of the most impressive technology companies in recent history. With a commitment to delivering impeccable tech solutions in a high-paced, high-pressure environment, Formula 1 teams and individual companies of the F1 Group have shown an admirable level of adaptability and resilience.

The face of the company is the Formula 1 race. Michael Schumacher, Kimi Raikkonen, and Lewis Hamilton are household names to most people around the world. Pit-stops are another beloved performance that the fans adore watching. But behind the garage doors, thousands of men and women work tirelessly to produce the winning product and perfect the performance. They spend every day breaking the boundaries of what a human-made machine can do.

Less known to the broader audience is the fact that Formula One is a technology company. Revolutionised by the digital transformation, every F1 team is involved in creating and delivering robust, reliable, high-performance technology solutions. “The digital landscape has become central for all of us,” said Gallagher.

Check out the webinar snippet with Mark Gallagher at the Centili Anniversary Week.

High-Performance Teamwork and Transformation - The Journey of Formula One business

What are the business decisions that transformed F1? Although the circumstances continually change, a resilient, focused company always finds its way to overcome the challenges. Here is how the F1 did it.

The story of adaptability

Everyone remembers the iconic tobacco commercials plastered all over Formula One cars and the champion drivers wearing full-body suits and helmets with famous tobacco brands’ logos. For many years, the tobacco industry sponsored the F1 teams until the health regulations have banned the promotion in the late 1990s.

Faced with the loss of a significant revenue source, the company has made a collective decision to play on its strengths and pivot as a technology company.

“We’re not in the sponsorship business, advertising, or tobacco business. We’re in the technology sector,” said Gallagher. “The thing we are really good at is selling brilliant technology solutions. We love rapidly prototyping advanced technology solutions and bringing them to market. The faster you need them - the better. The more competitive the market, the better. As a result, Formula 1 teams have completely changed their business models.”

One of the reasons the F1 teams are so great at adapting is the very nature of the business. Every year, each team needs to adjust to the new compliance and regulations developed by the sport’s governing body, the FIA, based in Paris. The pursuit of ever better, safer, more extraordinary technology never ends. It is only natural that throwing F1 an impossible deadline will be a piece of cake to them.

The numerous external challenges, like the dotcom bubble, the financial crisis in 2008, and most currently, the Covid-19 pandemic, keep the readiness for major shifts in the business model a constant in F1. The key lesson to a company going through a new revenue landscape is to play to its strengths and find the best ways to translate core capabilities into a new business model.

From our own industry’s perspective, being prepared for and anticipating new revenue models is an advantage that often creates the edge necessary to overturn the market share. The underdog players who are ready to challenge the status quo, make the disruption and change the ecosystem.

The story of disruption

Formula 1 has its favourites and underdogs, too. One of the greatest disruptions occurred when Red Bull bought a team in 2004. When they first came in, no one thought of them as a threat. It has soon made four-time world champion, defeating major players including Ferrari, Mercedes and Renault.

Being an underdog brings an unexpected advantage. “An underdog can beat a champion by taking a new approach, questioning established ways of doing things and innovating,” said Gallagher. “Simply ‘copying’ performance is not going to bring a competitive advantage. Besides, a smaller, more closely-aligned team with shorter communication lines and a greater ability to change direction or develop new strategies. Larger companies struggle to do this.”

“The opportunity for disruption today has never been greater. By combining existing technologies, we can create new value propositions for customers,” said Gallagher.

Another crucial aspect of disruptive thinking is a competitive mindset.

“Every morning, we have to consider that we have nine competitors determined to beat us (the Formula 1 industry comprises ten individual teams). How can we work together smarter? How can we work more efficiently? How can I help my colleagues? Without asking these questions, we stand no chance.”

The nature of Formula 1’s business is that it continually races to meet deadlines. With 22 to 23 regular races a year, scattered around the globe and calendar, the teams need to meet deadline after deadline. These circumstances make it high-pressure work and call for absolute alignment of the forces. “Fast-moving world calls for fast-moving businesses,” Gallagher concluded.

The Human Aspect is Critical

“Every time that Mercedes Benz wins the Grand Prix, they nominate an ordinary team member to represent the team on the podium beside the winning driver.” Prizes are awarded to drivers and teams, but Mercedes Benz uses this powerful gesture to show the team unity and present the success as a joint effort of every single employee involved.

One of the most impressive performances during a race is the pit stop, where mechanics change the tires and adjust the car’s aerodynamic settings. The pitstop should last two seconds, and the only reason people make it is because they work on the following three things.

There are 36 tasks, 22 people, and only two seconds to perform. 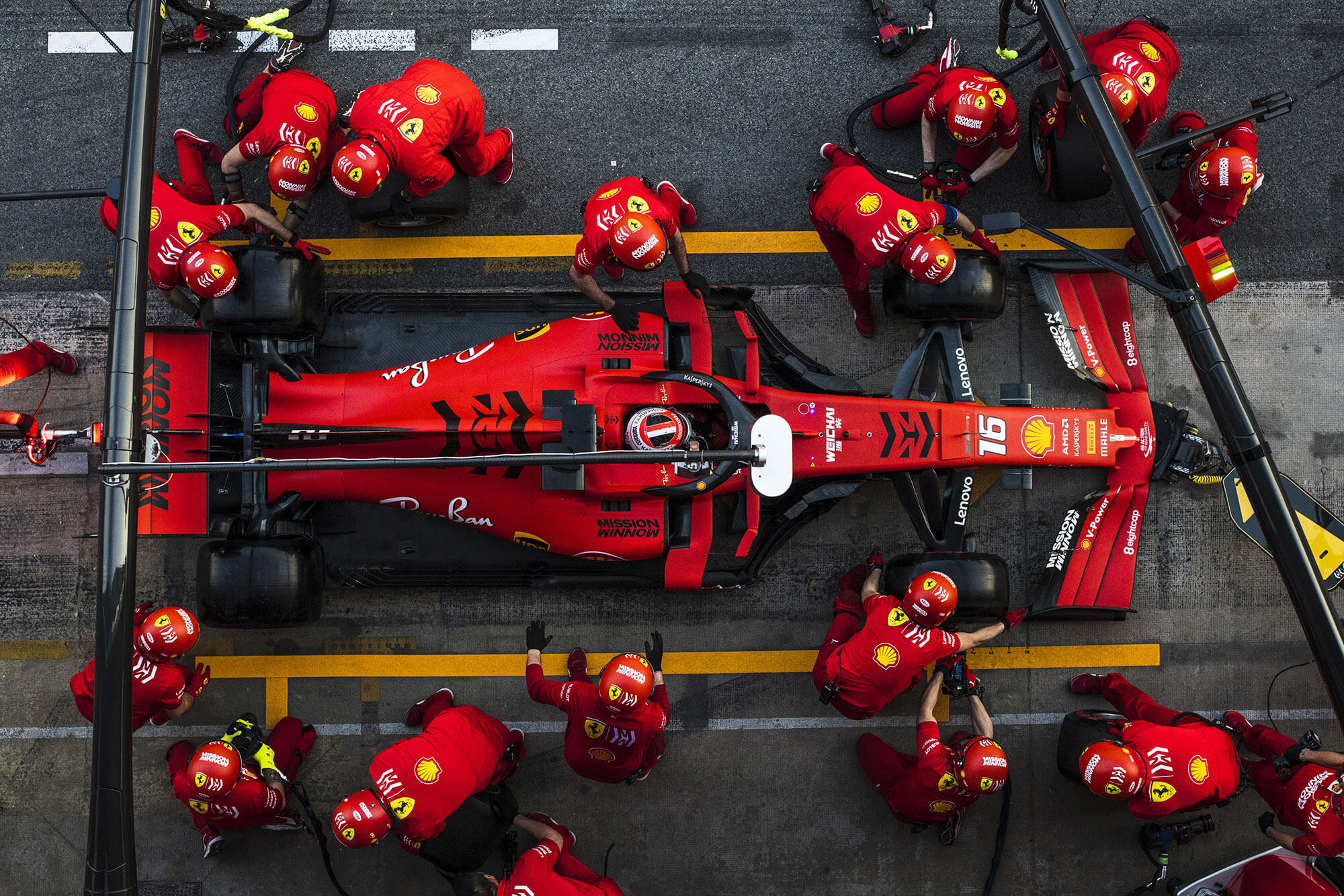 In 2019, Max Verstappen from the Red Bull team won the Brazilian Championship. His pitstop lasted for 1.82 seconds. He won because a team of ordinary men and women did something extraordinary - because of the team as a whole.

The success is at the intersection of technology and people

Michael Schumacher is one of the most prolific Formula One drivers in history. Before joining the Ferrari team in 1996, the team hasn’t won a championship since the 1970s. Schumacher quickly established himself as a force of change, analysing and approaching the performance issue at a company level.

Obsessed with performance reviewing, he soon exported this mentality to the whole organisation. After every test drive, Schumacher would immediately run to the engineers to check the data traces, asking what he could do to drive better the next time. The self-scrutiny helped him establish a sense of hunger for growth across the team.

Any internal misalignment of forces stopped - Schumacher unified the entire team by conducting regular meetings with 100% mandatory attendance. The reason was simple: there was no point in getting 80% of people on the same page and having 20% still do or believe something opposite. It only made sense when every employee was there to share wins and failures and ask those who had made a component that failed to fix the issue by the following week.

The powerful example of self-scrutiny and openness to failure made Schumacher the industry’s all-star among his colleagues and fans.

Today, Lewis Hamilton follows Schumacher’s footsteps. He goes to the factory every two weeks and talks to the entire company about improving performance and learning from failure. During a race weekend, he will participate in analysis meetings at least twice a day.

Creating a culture that embraces failure and uses it as a learning opportunity is straightforward in Formula 1. Since the early days of the sport, drivers compete against a piece of data: the stopwatch. Following from there, the entire company heavily measures performance, and everyone is accustomed to acknowledging failures. However, they work hard to create a sense of unity and teamwork, celebrating achievements together.

In F1, the driver is the end-user. The feedback cycle is extremely well coordinated. The data, the technicians, and the driver are in a constant review, analysis, and performance cycle. Matching the data and technical perspective with the end-user experience is the key to the product’s continual evolution.

In our industry, measuring data proves a great steering tool for business and service development. Somewhat slower-paced than the Formula 1 industry, we aim to follow the industry’s pulse. By combining data and user feedback, we create evolving products that help our customers bring life to their customer base.

Direct Carrier Billing in 2021: Why Is It More Relevant Than Ever?